Our fun and knowledgeable team of Rangers are amazing ambassadors of K'gari (Fraser Island). You’ll spot these friendly faces around the resort, running a series of guided walks, tours and nature-based activities and our renowned Junior Eco Ranger Program, often pointing out various wildlife species and sharing fun facts along the way. Did you know - they even met the Duke and Duchess of Sussex on their official royal visit!?... 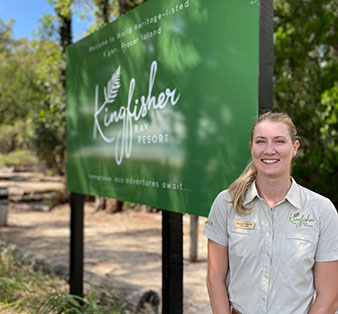 Ranger Cassie has been a member of Kingfisher Bay's Eco Ranger team since May 2019 and has recently stepped into the role of Head Ranger.

Growing up in Hervey Bay, Cassie has always had a connection with the ocean and a passion for wildlife, sparking her interest in marine ecology and conservation. This inspired her to complete a Bachelor of Animal Ecology with honours in Marine Science at the University of the Sunshine Coast in 2018.

Cassie’s curiosity and fascination of marine ecosystems has led her to work on multiple research projects involving sea turtles, sharks & rays, fish, birds of prey and coastal mammals, even having her work on habitat restoration and estuarine fishes published in a scientific journal.

This part of the world is home for Cassie, visiting many times throughout her childhood and for her studies, she loves to showcase this incredibly special and unique place to our guests while helping them to develop their understanding and appreciation for the island and its surrounding marine ecosystems. 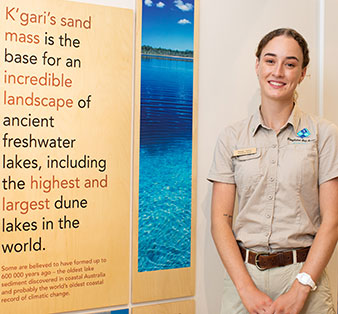 Tasmin has dreamed of working in Environmental Education her whole life. Inspired by David Attenborough, and her time as a Junior Reporter on Totally Wild and Scope, she graduated from the University of the Sunshine Coast (USC) with a Bachelor of Animal Ecology in 2018 and a Bachelor of Science (Honours) in 2020. Her main area of study was in the Evolutionary Biomechanics of Climbing Lizards.

In her studies she has visited K'gari several times, along with many other wild locations; even the Galapagos Islands! She is excited to learn everything she can about the history and ecology of K'gari, so that she can pass this on to our diverse range of guests. Tasmin was also present at the launch of the K'gari Discovery Centre (pictured), which was a joint initiative of Sealink Fraser Island and USC.

In her free time she enjoys swimming/snorkelling at the beach, reading, running, and hiking. 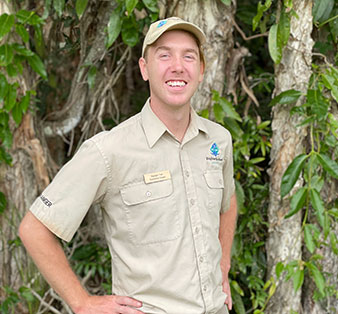 Tim began his journey with the Rangers through a volunteer opportunity offered through the University of the Sunshine Coast (USC). He was selected for the position and began to assist the team during the September School holidays. However, due to his passion and excitement for the role, Tim was officially employed and invited back for each holiday period while he continued his studies. Tim has since completed his Bachelor of Recreation and Outdoor Environmental Studies at USC and has now relocated to the island full-time.

Growing up in Melbourne, he worked as a sailing instructor and lifesaver. Due to his love for a warmer climate, Tim moved to the Sunshine Coast to focus his studies on coastal environments. His passion for the outdoors has created a platform for him to create a career focusing on the environment and educating people about ‘what’s in their backyard’. Throughout his course, Tim has been to K’gari multiple times to study its coastal habitats and wildlife. He has experienced most of the walking trails that K’gari has to offer through peer led expeditions and Tim’s love and awe of K’gari continues to grow every day. 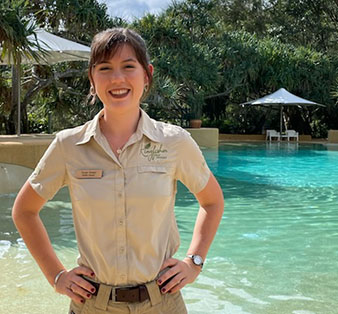 Bridget graduated from the University of the Sunshine Coast (USC) with a Bachelor of Arts, majoring in History with minors in Human Geography and Town Planning. During her studies, Bridget conducted oral history research in Vanuatu under the Australian Government's New Columbo Plan and volunteered at Bankfoot House Homestead in the Glasshouse Mountains. Due to both her love of history and memories of childhood holidays on K’gari, Bridget is enthusiastic about sharing the history and culture of the island with others. 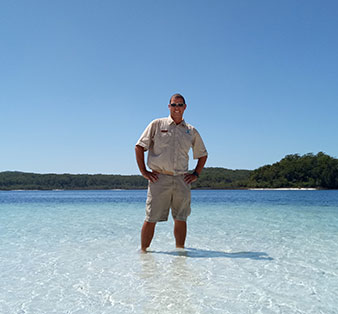 Ranger ‘Jay’ as he is affectionately known, started work at Kingfisher Bay Resort in December 2007.

Initially working in the Food & Beverage department, he started training with the Ranger’s department in 2008 and has been a valued member of the team ever since. Working on and off with the resort over the years, Jay now works at one of the local High Schools and joins the ranger’s team throughout school holidays.

A direct descendant of the Butchulla People of K'gari, Jay is an expert in bush tucker and bush medicine survival. Some of this knowledge he learnt from the elders within his family, but most was through his own personal research, where he gained an appreciation for culturalism and science.

He has a certificate in TV Pro Global and extensive acting training, which he wishes to combine in the hope to one day have is own TV show, based on the culture and science of plants. Jay is full of passion, always wears a big, broad smile and ensures everyone is enjoying themselves while on his ancestral homeland.

Check out our weekly What’s On Guide for the full schedule of Ranger-guided activities – Our team look forward to meeting you!

Things to do on Fraser Island

Lazy days on Fraser Island are the stuff that holidays are made of – but life in the slow lane, doesn’t have to be, that slow…
Kingfisher Bay Resort’s Ranger team has developed an activity program that’ll satisfied your taste for adventure and leave you fulfilled at the end of the day.

Stretching over 123 kilometres along the southern coast of Queensland, Fraser Island is the largest sand island in the world.
...read more